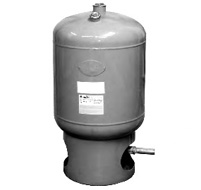 In general, heating systems in one or two story buildings may favor a lower cost compression tank. When boiler rooms are at the bottom of taller buildings, bladder tanks will be the better choice because they can be up to 75% smaller than compression tanks due to their pre-charging ability. Also, the bigger the compression tank the more it will weigh (the tank plus 8.3 lbs. per gallon of water inside) and the more it will cost to engineer and hang it securely.

How do I know if the expansion tank is working properly or not? Answer: Watch the boiler pressure gauge as the system heats up. If the pressure rises noticeably then the tank is (a) undersized (b) waterlogged (compression tank) (c) ruptured bladder (bladder/diaphragm tank) (d) not adequately pre-charged (bladder/diaphragm) or (e) Valve is closed isolating expansion tank from the system.

Sizing expansion tanks: The following information is required: (a) Total system gallons (boiler + piping + heating coils). (b) Fill water temperature (use 40-50 degrees F. for most applications). (c) Maximum hot water operating temperature (d) Boiler relief valve setting (most new Rite Hot Water Boilers have 125 PSI relief valve settings). (e) Static pressure at expansion tank location after the system is filled with cold water (Use 1 PSI for every 2.31 feet of system piping above the expansion tank). These numbers are then entered into our sizing program to determine the model tank you need for the job.

Air in system: Air can cause knocking and hammering noises inside a boiler when it fires. While this is more annoying than harmful, entrained air also acts as an insulator and will lower boiler efficiency. It is therefore important to eliminate air from the system. In compression expansion tanks, air is in direct contact with the water. In Bladder/Diaphragm tanks the air is not in direct contact with the water. Why is this important? Because when the system cools down the volume of water will shrink. Furthermore if the water is in direct contact with air it will absorb more air as it gets cooler. In systems with compression tanks, this air can get back into the main piping and work its way back through the boiler until it reaches the air separator where it will separate out and follow the piping back up to the expansion tank where it belongs. Do not put automatic air vents on systems with compression tanks as eliminating this air will eventually reduce the air volume in the tank until it isn’t enough to be effective or becomes waterlogged. Gauge glass seals and valve packings on compression tanks may also be a slow escape path for air and eventually cause the tank to lose its air cushion. System connection to a compression tank should always be with a B&G Airtrol Fitting which acts like a trap to help keep air in the tank. If the system stays hot all the time then the shrinkage and air getting back into the system will not happen. Systems using compression tanks are called air control systems.

Systems using Bladder/Diaphragm tanks are called air elimination or air removal systems. This system uses air separators and manual or automatic air vents to get rid of air in the system.